The Dead Sea – A Brief History

The Dead Sea lies within an hour’s drive from the city of Jerusalem, ‘Yam ha Melach’ (The Dead Sea in Hebrew) is surrounded by the spectacular scenery of the Judean desert. Not only famed for the sheer beauty of the area, The Dead Sea is quite literally like nowhere else on Earth thanks to it’s uniquely low elevation level at 423 meters below sea level. It’s also noted for the region’s extraordinarily high salt (or saline) levels. The high salt levels have rendered these magnificent waters out of bounds for swimming and diving enthusiasts, as the salt itself makes these hobbies impossible.

This hasn’t put tourists off though. The combination of the beautiful arid climate, the crystal clear blue skies and the exquisite scenery make The Dead Sea one of Israel’s most popular destinations for visitors to the country. And the locals enjoy it just as much. Huge numbers flood to the area to enjoy the benefits of therapeutic natural elements provided by its sulphur baths and mud packs, as well as hiking or walking. Many simply enjoy relaxing in the breath-taking scenery and enjoying the sunshine which is known for clearing up common skin conditions such as eczema and psoriasis.

What Makes The Dead Sea So Unique?

Besides boasting the lowest elevation on the planet and truly exceptional salt content, The Dead Sea stands out thanks to the intense levels of natural minerals that are found in the area, a form of life which is found in few other places on Earth. It has long been known that these minerals can have hugely beneficial effects on the body and mind. Even King Herod and the infamous Cleopatra have journeyed to The Dead Sea to soak up its healing powers! In particular, medical experts and doctors alike recommend visiting this area for those suffering from arthritis, high blood pressure and a whole host of common skin complaints.

As if all of that wasn’t enough to convince you to pack your bags immediately, the year round sunshine and consistently dry weather is enough to attract most, whether it be to indulge in an aromatic salt exfoliation body treatment, a cleansing mud scalp treatment, or a hot stone massage, The Dead Sea is known as the world’s oldest natural spa for a reason. 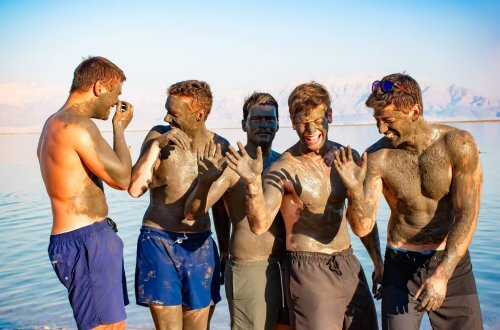 The Geological History Of The Dead Sea

Of course, there has to be a reason why The Dead Sea is as unique as it is, right? The fact is that it was created by a sudden rise in the land between the Sedom Lagoon, which the Jezreel Valley connected to The Mediterranean. When the land rose, it created an enormous lake surrounded by land on all sides. The floor of the valley shifted due to the movement of the Earth’s tectonic plates and the arid desert climate caused the evaporation of the lake itself over time. What was left is The Dead Sea as we know it today.

In the past the lake was supplemented by the Jordan River, whose waters flowed into the Dead Sea. However today, the only source of water to The Dead Sea comes from sulphur springs and occasional flash flooding. The fact that there is no steady supply of water to the area combined with it’s desert location and the slow but steady evaporation this causes, it’s no surprise that The Dead Sea is shrinking over time. As the lake shrinks, salt crystals are left behind, which fall down to the sea floor. It’s thought that up to 10cm of these crystals fall to the sea floor each year, which explains why the salt levels in the water are so astronomically high. This, in turn, makes the water concentration so dense that if you tried to swim in it, your body would just bob along the surface!

What makes this lake even more unique though is the fact that despite its salt levels, it continues to support a complex ecosystem of natural life. The freshwater springs and oases which are scattered around the shores of The Dead Sea provided the perfect environment for dozens of indigenous species of fish, mammals and native plants. Over three hundred species of birds are found in the area too, including many migrating birds stopping for rest on their journey from Europe to Africa, such as eagles, kestrels and buzzards. 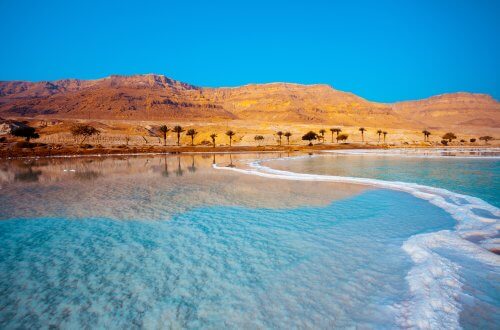 The Ancient History Of The Dead Sea

The Dead Sea has a deep association with The Bible, although it was referred to by a number of other names. ‘The Salt Sea’, ‘The Eastern Sea’ or ‘The Stinking Sea’ as it was sometimes called, has historically been viewed as more of a territorial boundary than a location per se. Despite this, it has been home to a number of significant biblical settlements such as Qumran, the ancient fortress of Masada and Ein Gedi.

It’s also believed by archaeologists that The Dead Sea was the location of the infamous destruction of Sodom and Gomorrah. These sinful cities were destroyed by God, according to Genesis. And The Old Testament story of Lot’s wife, a woman who ignored God’s command to not look by and was subsequently turned into a pillar of salt, took place in the region. As a result, a number of breathtaking salt formations which are found in the south-eastern part of The Dead Sea have been playfully nicknamed Lot’s Wife by tour guides and local historians.

The Dead Sea Scrolls And The Qumran Caves

In 1949 a shocking discovery was made in nearby Qumran. A young shepherd boy went looking for a member of his flock, but to his astonishment fell upon a cave containing what are now known as The Dead Sea Scrolls. Made of animal skin, papyrus and copper, these documents are believed to date back to 3 BCE, making them approximately two thousand years old. They have provided historians with incomparable insights into the Essenes, an ancient community who had fled from Jerusalem to The Dead Sea, further adding to the profound historical significance of this unique place.

Today, visitors to the Israel Museum in Jerusalem can look upon them and marvel at their history. ‘The Shrine of The Book’ as it’s known, is a spectacular white dome which was designed masterfully to mimic the lids of the jars in which the young shepherd discovered the scrolls almost a century ago. It’s easy to see why any amateur historian would delight in observing the Aleppo Codex, as they’ve become known, in such a magnificent location.

Things To See And Do Near The Dead Sea

For many tourists visiting Israel, an excursion to The Dead Sea is certainly a highlight. But there’s so much more to do and see in this place than you might think.

For hobby walkers, a stroll along the long promenade is a perfect opportunity to enjoy the warm desert sun and breath-taking views. From here you can peruse kiosks and cafes, rent a sun lounger to bask in the sun and cool off when needed in public showers. You can also clearly view the Jordan River from this vantage point. And dotted along your walk you’ll find a selection of spas offering a huge variety of mineral infused wellness treatments.

If that sounds a little too relaxing for you, don’t worry. The Dead Sea has plenty to offer adventurers. On a four hour jeep safari you’ll travel over rugged terrain inland into the stunning landscape of the Judean desert. On your way you’ll pass the historic location of Qumran, where The Dead Sea Scrolls were discovered, as well as the Murbaat Caves and you’ll get to experience authentic Bedouin hospitality and take a break from the hot sun in an airy outdoor tent. If this doesn’t appeal to your inner adventurer, other options for adrenaline seekers include sky-diving off the ancient Masada fortress, or rappelling over the cliffs of Wadi Qumran.

For hikers, The Dead Sea has much to offer. Favourite spots in the area include David’s Waterfall, Einot Tzukim, Metsuke Dragot, the Ein Gedi hot springs and Dodim’s Cave are all well-worth exploring for hikers ranging from beginners to experts. Each trial is marked according to difficulty level with 10 marked as moderate, so there truly is something for everyone. Picnic areas are abundant along each trail, and the views of vast mountain slopes and local wild goats are sure to go down well as you rest in the sunshine.

For the more laid back tourist, there are an array of tours to choose from. The Masada and Dead Sea tour is a firm favourite among tourists and the Masada at sunrise, Ein Gedi, and the Dead Sea is stunning for those who enjoy romantic scenery.

Culture seekers will enjoy combining a visit to the vibrant city of Jerusalem with a trip to The Dead Sea. Horticulture enthusiasts will enjoy a private guided tour of Qumran and Ein Gedi and the sightings of ibex, eagles and rock badgers which are easy to come by in these areas. And for those looking for utter relaxation, there’s nothing quite as relaxing or refreshing for the mind and body as a The Dead Sea Relaxation Tour.

Nearby lies the Jordan River and Jericho, a small but ancient town bustling with history and local culture. The ancient baptismal site of Qasr al Yahud, the location of Jesus’ baptism and a place of pilgrimage even today (although pilgrims no longer travel here atop camels as was traditional), is always fascinating.

The truth is, this unique place has something for everyone. The only issue is, there’s so much to take in. That’s why a guided tour is really the best option to ensure that you have the best possible experience in The Dead Sea. Just make sure to bring your comfortable walking shoes, a good sun hat and plenty of sunscreen. Oh, and a camera. Believe us, you’ll want to take as many pictures as possible to capture the rare beauty of The Dead Sea.

Why Book With Us